Nola Studiola: What makes you laugh?

My son makes me laugh, because his heart is still filled with the purity of children and his way of seeing and feeling the world is better than the word “joy.” But I also often bust a gut laughing when our human vulnerabilities are exposed without anyone suffering…little daily occurrences where our bofusness slips through…like when I walked around an entire day with my skirt on inside out, mistaking the attention for “damn, I still got it.”  Or when I get home from an important lunch with an important person and realize I’m wearing half of my lunch on my rack.  Alison Bechdel, Kristen Wiig, and Monica Drake make me laugh in their writing all the time.

AB: Alison Bechdel and Kristen Wiig made me think of how I see those ladies as one of my systems of sense of humor, like as if sense of humor has an anatomy, with circulatory and digestive, nervous and so on and so forth, systems all overlaid.

I have the Thirteen Year Old Boy system sense of humor, in which farts and poop are funny anywhere and talking about them is good. I read somewhere that American humor is 90% fart jokes; what is a fart joke? I don’t know. I guess I am an American.

My other system of humor is the Tyler system. It is: songs, voices, caricaturing people in our world and still loving them–it is dogs drinking sherry milkshakes in terry robes, it is woodland fantasy world. His humor system accepts that the world is topsy turvy and so no one is immune from having a turvy lamp cast on them, no one is immune from a heavy brushstroke. He tried to teach me to laugh at myself. It is fantasy, and animals with large feet, but it is not about poop, though poop can come into play. Tyler makes me laugh. We have catastrophic humor–the Family Guy sort of humor when, after the judge in a courtroom rules “guilty” and the witnesses gasp “oh no!” and then the Kool-Aid man comes crashing through the side wall, bellowing “Ohhhh yeah!”—we like thinking about how someone might get so nervous they climb into the kitchen sink and poop.  Tyler and I diverge when it comes to sarcasm and the grotesque, aka Diluted Southern system, but I feel I can and will draw it out of him or anyone else if they hang out with me long enough.  (Humor systems take years to expand. Don’t be cranky or impatient.) My girlhood friend Mari Tollefson-Carlson is an overlapping system–we strummed badminton raquets and made up songs in the folksy twang of bluegrass singers my parents loved, inserting offensive lyrics, or boring audiences to death with three-hour long parlays into fictional geneology, or conquests, or, boogers.

Diluted Southern system- My first female comedienne in my family is my cousin W. She is an expert at Southern sarcasm and gallows humor and deadpan. Straight-faced and lampooning. Southerners are the best at sarcasm. Watch out, it’ll cut ya. The word “well” has many syllables and various definitions. One time I turned in a story in a fiction workshop in which I delineated the prosody of well in my family and the professor said this isn’t a story and she directed me to William Gass and then said “we’re done here.” I don’t actually think she ever read anything else I turned in. After teaching fiction for a few years, I understand why that happened with her. She didn’t know how to communicate with me, so I guess it was pointless to read the stuff I was yakking on about. It is all okay. Southern humor system is all about the grotesque. Getting up on it and loving it. Truman Capote is one famous version. My Dad, Bob Ripley, Keith Cool, Andrew Barker. My uncles, my aunts, my cousins. You should hear Uncle Bob’s story about the time his in-law used their discharge check to buy a monkey at the state fair. Monkeys who throw eggs and get drunk are funny. Of course, that story has a sad ending. That’s the way of a lot of southern humor. Sad endings, or sad half-way points, woven in and around the grotesques.

Famous people system: Monty Python, Gilda Radner, Chevy Chase, Jamie Foxx, Kristin Wiig –this is the physical haunting humor. Kristin Wiig–the moment she smiles tightly at her friend, played by Maya Rudolph, in Bridesmaids, when Rudolph’s character announces her engagement–Wiig’s character is just DYING inside. She is, in this moment of the film, watching her girl-self leave–because the girl who made her girlhood (best friend) is saying goodbye–this is a very poignant moment for me. These moments of people on the verge of despair, when they react with frenetic, resolved platitudes and /or thinly disguised hysteria that really, for me, is like looking into a mirror–that’s a sort of funny that is ice-edged with crying. My fellow female writer, Susan Kirby-Smith, does this superbly. I have peed myself reading her stuff. She has a way of creating these women who are seriously clinging to their trappings of social protocols, but just underneath the surface is deep rejection of the protocols, and to some extent, the material status and privilege they cling to in order to pass as “sane” in scenes. To be clear–I am not talking about or titillated by campy objectified hysteria, or thoughtless depictions of “crazy women.” Suffering is one thing–the ability to show a bit of the dilemma you’re in, the question of whether or not to placate those around you by assimilation/how to present yourself in your dilemma–that unleashes some of the funny, and creates a powerful sufferer, I think.

“Hysteria” is one of the first lessons we receive as girls/women about how the world will receive us and the interpretation of emotional intelligence. And when a woman portrays the razor-thin line between pure emotionality adn “behaving,” I think a real statement is being made about how silly our fear and our rules are–men’s and women’s, mind you. We are told “You’re crazy” both as a taunt and as a joke we are supposed to laugh along with. And “hysteria,” in these depictions, is made less powerful when a multi-dimensional character engages it. 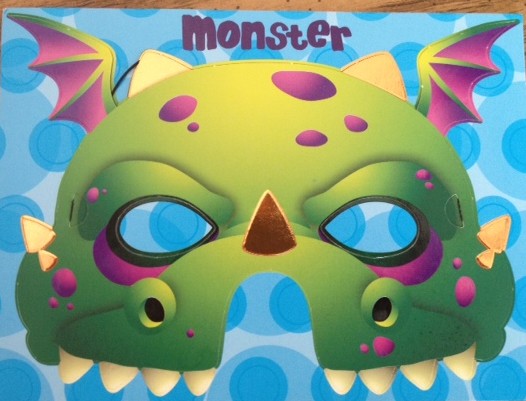 (caption: Here is a card that turns into a mask from my friend Kt.)

Tina Howe hits this funny bone for me. I love Maya Rudolph. I like Zooey Deschanel, her New Girl show is really lovely–I do admit that sometimes the girlish, child-like performance gives me the heebie geebies on a thirty year old woman who knows she works it as a sexual performance at the same time. But to each her own, ya know. Gilda Radner didn’t make it a sex performance.

Chelsea Lately works the grotesque all right. I think she would be a funny friend. But I don’t laugh at her show. Grotesque is tough that way. Sara Silverman is very funny. She narrates you into her disturbia, so that she has tried to get you to sit down and have tea before she slaps you with it.

My poet friend DeWitt Brinson is funny. He writes funny lists of things.

the Darkness/making fun of children system I adore South Park and the creators’ subsequent inventions. I used to calm myself down after a crazy day teaching middle school by watching one or two hours of South Park. I admit I over-developed my ability to see children as sideshow entertainers after my experience teaching middle school. Sometimes my friend A and I called kids dumb. But not to their faces. But by dumb I mean how they like stuff they won’t like later, not “dumb” like the education system bangs into their heads. I know. I’m alienating a bunch of people here. I hope I’m not offending you Ms. Yuknavitch. It’s just…sometimes middle school teachers become their students. I once saw a youtube video of me dancing in a teacher talent show when I was a middle school teacher, and my pants drooped and my thong revealed a lot of white space. That’s funny.

Calling children peanut galleries is derogatory and mean spirited, and sometimes I do that. In my defense, at the same time, my experience teaching within the public school system (not my school, but the Powers that Be’ed over my school) was developing my acute sense that the government and/or all government departments dealing with kids actually hate kids. I think my caricaturing and my making fun of children is part of my Southern Gothic coming out. Am I excused? Middle school makes all of us, teachers and students, grotesques. Sometimes when I taught medieval units I would be sure to make a part of the classroom the “black plague graveyard” and a part the “dungeon” so I could make more kids be quiet and sort of check out for a while. California teachers regularly have 36-40 kids in a given class period. Am I excused? I stopped being a teacher to try to get a handle on some things before I scarred someone. Maybe the best teachers feel they are the worst. I don’t know. The responsibility angers and dehydrates me. My favorite teacher used a miniature whip that she’d slap on the desk when she yelled “miserable and rotten!” over and over at us. I adored her. Am I excused? She loved all of us desperately. I am not smart enough to be a teacher. I can do so much harm. Teaching is where I found all my humor.

My vitamins system–John Waters ouevre, Wild Things, Romi and Michele’s High School Reunion. These are raunchy and in poor taste, and they are more like eating spinach for me. Hypersexualized poop jokes is good and right and calms me down.

Shawn Bonner and I used to pretend to be various versions of old married couples as we drove through the streets of Wheaton, Maryland. That was funny. We yelled at each other a lot.

My cousin C. is a little of that and a little of another system which is part Tyler  and part famous people system, because we construct worlds in which people in our lives traipse around, unhampered by editorializing and deep thought. Our dramatizations keep me returning to who I am. A.C.B., a first love, delved into personification of snack foods a lot with me. Green popsicles are the pirates of the novelty ice cream world. This is helpful.

My mom- She is just everything. She has found things to laugh at after a lot of pain in her life and I think that is the best way to encapsulate my “preferred” humor–when it’s a choice over despair.

The inside-out skirt, though. Laughing at that, and recalling how many beautiful moments were misapprehended around it during the day–that’s the best. I got so I depended on a certain personality in my middle school classes to come up to me and whisper politely, “Ms. Barker, your shirt’s on inside out, and I thought you’d want to know before third period begins.”

And maybe you want to see her essay on being a woman writer in Pank.

P.P.S. When you type this long and this much and you don’t have Wi-fi, you sit at a place like Slice Pizza to do it, and you meet awesome people who work there, who are sweet to you even tho you are hunkering over a laptop and a composition book forever. Look here for a local arts and design blog tip I got tonight!

One thought on “Lidia Yuknavitch’s visit to the Studiola begins”