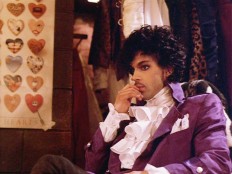 I have been actively searching for answers about gender for a while now, specifically what performances are acceptable, and what is off-limits.

This exploration took me to a record store in Florida, where earlier this summer, while vacationing, I found a copy of Prince’s Purple Rain (1984) in the bargain basket–only $5.99!

Listening to the CD transported me to 1998, when, in the confines of my bedroom, I first watched the film-version of Purple Rain on VH1.

Soon after locating the CD, I stumbled across a copy of Purple Rain on Blu-Ray in the bargain basket at Best Buy–$7.99!

(Side note: Much of Prince’s catalog is discounted, reduced, or on sale. When did this gender-performance lose its value in popular culture?)

I raced home to watch it. Here is a summation of that experience: Purple Rain has to be one of the most over-the-top, poorly acted movies ever–and it’s fabulous. 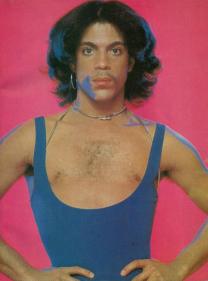 I could add “guitar god” to that list–here’s some proof.

For me, Prince is a tentative role model. I say “tentative” because I have questions about the authenticity of his performance (circa 1984). For example, what enables Prince to flaunt his stuff on stage without fear of consequences? What protects him? His fame? His reputation as a “lady killer?”

Are we supposed to be “in on the joke” of his gender performance?

Taken at face value, Prince appears to be pushing boundaries–which is great–but how does he get away with a performance that some might call “androgynous” and what others might call, simply, “queer” while selling millions of albums? 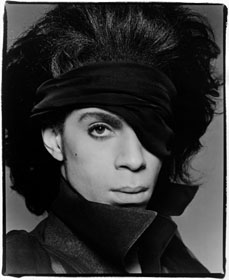 Does fame give Prince a license to queer?

Meanwhile, non-famous gender nonconformists typically experience some type of cultural clash, including physical violence and harassment. How much of this has Prince experienced?

I don’t want to confuse Prince’s tendency for wearing women’s clothing (some light cross-dressing) with gender nonconformity. His presentation–from clothes, to makeup, to attitude, to persona, to lyrical choices where pronouns become obscured–suggests that, at the very least, Prince is participating in those “loose” gender norms applied to recording artists in the 1980’s. At most, Prince could represent an icon whose gender presentation has less to do with his identity and more to do with the freedom that is part and parcel of fame. Wouldn’t it be nice if we could all have a piece of that pie?

I am searching for writers and literary artists who occupy a similar space as Prince. I would be grateful for suggestions.

(For a fantastic, if sanitized, academic examination of The Purple One, see Rupert Till’s “The Personality Cult of Prince: Purple Rain, Sex and the Sacred, and the Implicit Religion Surrounding a Popular Icon.”)