This past November, I had the wonderful privilege of reading my fiction at the Fireside Follies Reading Series in Brooklyn, NY, where I met author Eric Nelson, who co-curates the series with the poet, Mike Lala. This popular reading series brings together both established and emerging writers alike, showcasing some of New York City’s edgier literary talent. In addition to co-curating this series, Eric is heavily involved with NYC’s DIY print scene as a zine librarian for ABC No Rio and he also works as a publicist for The Atlas Review. His essays, criticism and fiction have appeared or are forthcoming in The Billfold, HTMLGIANT, chimes/SIRENS Vol. 1, Brooklyn, and Squawk Back, among others. His short story collection, The Silk City Series, was published by Knickerbocker Circus in 2010. His new book The Walt Whitman House will be released from The Crumpled Press in January 2013. I recently had the honor of interviewing Eric about his work as a writer and co-curator of Fireside Follies.

Olivia Kate Cerrone: Congratulations on the upcoming release of your second book The Walt Whitman House with The Crumpled Press! This work follows a day in the life of two teens, Big Rick and Boo, whose shared taste for a little mischief and adventure is met with unfortunate consequences. Set against the urban grit of Camden, NJ in the early 90s, it’s easy to become absorbed in the masterful plot and engaging friendship between the two, whose characterization is sharply rendered throughout. You have an incredible talent for dialogue, which is often speckled with enough humor and raw honesty to effortlessly bring each scene to life on the page. How did you access the characters, and especially their dialogue, in writing this book? How significant is character for you when writing fiction?

Eric Nelson: I never wear headphones on the subway because I had an iPod stolen from me years ago and just never bought another one, so I get to hear conversations on the subways and buses. I love listening to kids on their way to and from school because they’re blunt and hilarious. Before I moved to New York I worked on and off supervising a large chain pet store and worked with a lot of younger guys, a lot of whom came from the city. They told some pretty wild stories about growing up, much of which I still remember. As for character itself, it’s quite significant; it comes before plot and dialogue, because each one has to be so developed and real that whatever they do or say will be plausible without question.

OKC: Maximum Rock N Roll Magazine described the stories in your first collection, The Silk City Series (Knickerbocker Circus Publishing) as “carv[ing] out a working class identity specific to the East Coast…with an eye for the antique, forgotten, miserable and deranged.” I deeply admire fiction that tackles on issues of class. How were you able to evoke working-class life in Paterson, NJ? Are there particular aspects of working-class themes that you find especially significant or important that you express in your fiction?

EN: The Silk City Series came from my mom. I was the first generation on her side, which was mostly Irish, to grow up outside of Paterson and that’s going back to the Potato Famine. I grew up hearing stories about how it was back in the 50’s and 60’s, and I used to play there with my parochial school best friend in the street outside of his apartment. He had friends who had names like Earthquake Ricky and Alpo Dog Food. He and his parents split to a house a few towns over, where they found a live grenade in the basement when they moved in. I grew up working class, but I was lucky. My mother worked her ass off to give me what she couldn’t give my older brother and sister and I didn’t know the full story until after she passed.  I enjoy writing about the working class, but I’ve always been interested in the marginalized in general. Some themes like family and loyalty are universal.

OKC: In The Walt Whitman House, you bring readers back to New Jersey, this time in the roughest parts of Camden. Could you speak to the significance of place in your fiction? What about this particular enclave of the Garden State inspires, or perhaps haunts, you as a writer?

EN: I find that place is significant in that depending on the world you’re building, location can have a huge influence in how a character speaks or acts. In the case of The Walt Whitman House, that’s crystal clear when you look at the choices the protagonists are faced with. The entire state of New Jersey haunts me to be honest, because I spent my entire life there until after college and now 90% of my family [members] are either dead or estranged and too much has changed. I still love it and I still return to see my sister, but if I were to move back, I’d have to go somewhere I’ve never been before like Bayonne. Camden was chosen as the setting because of the 1991 Mischief Night Arsons, the location of the Walt Whitman House and as an easy juxtaposition for the classical and modern use of the word “ghetto.” 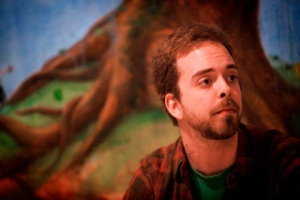 OKC: In a time where the MFA (and perhaps even the PhD) in creative writing has become the traditional route for most emerging writers, you took a less conventional path, forgoing graduate school and becoming intensely involved with the New York City DIY print scene instead. How has engaging in a community of artists, if at all, shaped your own development as a writer? Why does community matter, especially in an arts scene as competitive as NYC?

EN: Honestly, engaging with other writers and then with curators if anything has made me more competitive. I feel lucky to know a lot of people who are so incredibly skilled at what they do and are constantly working that it keeps me on my toes. Community, especially now with the advent of social networking and the way Millennials on the whole were raised, is a tight rope walk. You want to support people with similar goals as yourself by sharing resources and coming to events, but at the same time you want reciprocation and to stay focused on your own work. One of the hardest things is maintaining objectivity, because scenes themselves boil down to the social essentials of who’s friends with who and who’s fucking who, which always spills out into who works with who. There’s nothing wrong with this, but when a conflict of interest is created, people need to be aware and mature about it. Nobody should be afraid to call someone out if they’re wrong because they’re afraid it’ll screw them or they’re afraid of hurting feelings; we’re all adults. I wrote The Walt Whitman House partially as a response to this, in that art, literature, and geographically specific scenes centered around these different mediums are ghettos, self-contained bubbles. With that said, there are a lot of great talents and a handful of truly kind people moving and shaking things in Brooklyn that I’m privileged to hang out with and know. 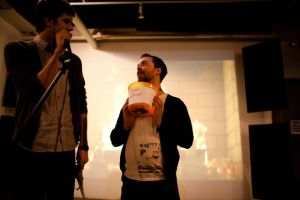 OKC: You remarked in the Bushwick Daily that you believe “writers looking to get published…[should] pay more attention to what you’re doing and less attention to what others are writing.” Could you speak a little further as to why you think this trumps writing for a trend?

EN: As a curator, I read contemporary fiction to see what’s new, who’s good, who’s getting press and who will fill up seats. As a fiction writer, though I read literary journals to see if they would be a good fit for what I’m currently trying to get published. Since that interview, I’ve definitely started to submit more to journals and websites to gain a wider audience and there are a good number of writers whose work I seek out, as well as a few journals I enjoy for entertainment. I was speaking more towards staying focused and disciplined and not getting caught up in the pettiness of “Why is that guy’s shit getting published and not mine?” As for trends themselves, the only ones I’m actually aware of right now in contemporary literature are the confessional or “alt-lit” and neither of those interest me very much. I pay as much attention to contemporary hip hop as I do to contemporary lit.

OKC: How did you get involved with the Fireside Follies Reading Series at the Brooklyn Fireproof in Bushwick? How do you and fellow co-curator, the poet Mike Lala, choose the performers?

EN: Fireside Follies started when my first book came out and I started booking small tours for it on the East and West Coasts. At the same time, I joined a collective in Brooklyn and met Mike Lala and I started booking him for group readings I was putting together. We booked one in August of 2010 together and then I asked him if he wanted to do a reading series. We chose Brooklyn Fireproof because we originally were booked for Northeast Kingdom, and then the owner cancelled the event on us to accommodate a private party. It worked out for the best; I’m more than satisfied with what we’ve done so far, considering we both write on the regular as well. 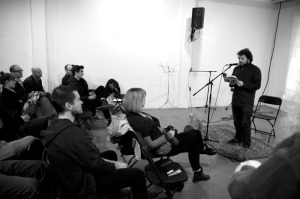 OKC: Thank you so very much for taking the time from your busy schedule to share your experiences with Nola Studiola Redux. Might you be able to share with our readers what’s next for you professionally as a writer?

EN: I plan to start a cat-sitting service come the New Year to pull in some extra cash, no joke. Writing-wise though, I was recently asked to participate in the Queens Council on the Arts Peer Circle for Literary Artists so I’ll be doing that until June and I’ll be guest editing the next issue of Five [Quarterly.] I’ll also be re-editing my novel The Pissant’s Bet to send out to a few small presses, write some more criticism and get a few more stories completed, the big goal there to finally get into the L Magazine’s Literary Upstart contest. Basically, domination without being a dick. Is that even possible?

The Crumpled Press will be having a special release party for The Walt Whitman House on January 10, 2013 at Treasure & Bond in Soho on 350 West Broadway. To learn more, please visit The Crumpled Press website at:  http://www.crumpledpress.org/authors/nelson.html

Olivia Kate Cerrone is a writer and educator. Her fiction has appeared or is forthcoming in a wide variety of literary journals, including The MacGuffin, New South, the Berkeley Fiction Review, War, Literature and the Arts, Quiddity, JMWW, Word Riot, JewishFiction.net, VIA: Voices in Italian Americana, and The Portland Review. She recently led a creative writing workshop for African refugees through the Stella Maris Onlus organization in Siracusa, Sicily. She currently serves as a writing mentor for the Afghan Women’s Writing Project. She earned an MFA in creative writing from New York University. Cerrone is the recipient of a “Distinguished Fellowship” from the National Endowment for the Arts and has won residency grants and fellowships from the Tin House Summer Writer’s Workshop, the VCCA, the Hambidge Center, the Vermont Studio Center, the Ragdale Foundation, the Kimmel Harding Nelson Center for the Arts, Art Farm, the Gloucester Writers Center and the Martha’s Vineyard Writers Residency. Contact her at: Olivia.Cerrone@gmail.com