One of the most pretentious classes I will be able to add to my list of Things I Think Make Me Pretentious But Actually Just Make Me A College Student is taking a Ulysses seminar while studying at UEA.

This book is, to put it mildly, a massive work requiring extensive footnotes reading and at least three different references open at a time to make sure you understand what’s going on and why it’s significant. Prior reading? Just The Odyssey, A Portrait of an Artist as a Young Man, and Dubliners. No big deal.

I’ve only read The Odyssey, so I’m a bit behind on the pre-reading business. In any case, Ulysses starts out with this self-proclaimed poet-artist-just-came-back-from-Paris-haughty-as-all-get-out guy named Stephen Dedalus. Stephen is very conscious (and would like to think he’s subconsciously aware as well) of the vast literary and philosophical significance of everything. He’s obsessed with Prince Hamlet, probably because he identifies with the tragic hero of Denmark, and never stops thinking about his mommy issues. Also, he’s obsessed with Aristotle.

Anyways, James Joyce apparently stopped writing about Stephen after the first three chapters/episodes of Ulysses because Stephen bored him. My seminar leader raised an interesting point about this. Stephen is intimidating. His thought process is constantly referencing religious/philosophical/artistic everything , so that his episodes prove the most difficult to wade through because Stephen is so inwardly turned.

And this makes him seem smart. When in reality (or book reality, whatever) Stephen is a recent university graduate, which makes him…well, it makes him pretentious and cocky and very much convinced of both his genius and superiority.

It’s probably telling more about my character than I would like to admit that when I started reading about Stephen I identified with him rather quickly. I took to Stephen like some young teenage boys take to Holden Caulfield in The Catcher in the Rye. I really, really liked Stephen. He was referencing all these things that were so fresh on my mind. He knew about Nietzsche and Hegel, about Keats and Wordsworth, about Aristotle’s theory of actuality and possibility, Plato’s theory of forms. As a philosophy and literature major, I was eating out of his hand.

But then my seminar leader pointed out, rather bluntly, that Stephen is an ass. There is literally a section of the book where Stephen is urinating on a beach and trying to find some deep, profound meaning in this natural bodily act.

Basically, Stephen needs to chill out and get over himself.  As a college student, it’s difficult for me to not feel awesome about catching references or being aware of the history of knowledge behind one or two words. I too need to get over myself.

Anyways, while I have been bogged down in reading everything Henry James for the last few weeks, Ulysses does have a tendency to release the poetic spirit within. When you’re stumbling over long, dense prose like James you have to bang your head against the wall a few times and read Joyce to make yourself feel human again.

So, yes, yesterday during my three-hour Ulysses seminar block, I doodled some poetry in my notes. Thus began what I like to call the Class Scribble Poetry Process.

A brief history of CSPP: I began writing poetry in class my freshman year of college, while stuck in a math lab. It was a rewarding experience that made me glad I had five hours to sit to myself jotting down ideas and making something of them later. Though I scribbled off and on after that, my most vivid recollection of engaging in CSPP occurred in my Modern Philosophy class. It was an hour and a half on Monday and Wednesday evenings, so at that point I was physically unable to pay attention to anything going on around me. The problem was, concepts like eternality of the soul, substance debates, and identity were going on around me, and I had to somehow channel this somewhere or else I’d be wasting a perfectly good opportunity to redirect some of this philosophical intensity into my writing. I wrote so many poems in that class. It’s shameful to admit how many, so I won’t. But this brings me to the present.

I haven’t been scribbling in class here, mostly because I’ve found myself sufficiently engaged in the seminars, and you have to participate when you only have ten people in the room with you. However, yesterday’s Ulysses seminar brought some much-needed poetry scribble thoughts to the forefront of my brain. I thought I’d lay out my Class Scribble Poetry Process so you can see how my mind works with these things.

Notebook Doodles: As you can see, my notes taper off into lots of phrases thrown about the page. For me, I usually think of phrases before I can construct a poem. Sometimes I have the patience to copy them out and play with them in a poetic structure rather than all over the page, but brainstorming-wise it really helps to just jot down whatever comes to mind. Which is what I did yesterday. 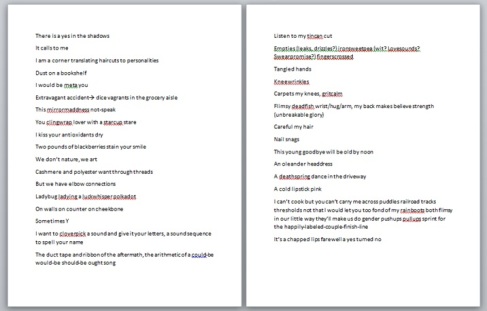 Transcription: When I got back from my seminar I immediately opened up a MS word document and quickly copied out all the phrases I had scribbled down in a linear format. This really helps so I can see what I have to work with. Often I’ll fail to copy down some of the phrases in the notebook, simply because I don’t like them or I don’t think they’ll work for this poem. If I think they still have potential I’ll type them up in another document and save it as “ideas” or “thoughts” or something to come back to later.

Structure: Here comes the part that really takes some work.  I usually have an idea in my head once I start jotting down phrases in the first step of what I’m writing about, but it’s not always clear. This is the step where it needs to become clear. You’ll add new phrases as you go, and scratch some you don’t think will work. It’s round two edit-as-you-go.

This is my method. This is what I’ve been doing for a few years, and it works well for me. I think Stephen Dedalus, fictional as he is, would very much appreciate someone writing poetry in a class covering a book in which he’s a character. I just have that feeling.