Things are changing both fast and slow here, and some of it falls along the tectonic timeline plates of “Before the Storm” and “After the Storm.” My friend Val attends neighborhood homeowners association meetings, where twenty to thirty residents, ranging in age from early 40’s to elderly squeeze into children’s desks in the local school and wrestle over issues of gentrification, noise ordinances, crime. I picture grown adults hanging over these tiny desks, their elbows poking off the edges, as they try to find common ground between the old-timers who have lived in Fauberg Marigny for decades, the gay community which has done a great deal to refurbish the residential property, and the business owners who draw hipsters with espresso and booze. 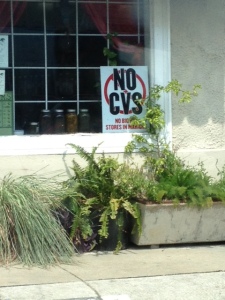 An elderly man complains about the noise coming from patrons of the Lost Love lounge at all hours of the morning, and the bar owner asks him if he’d rather wade through the prostitutes and the johns who used to claim that corner. Tensions are high around issues of old and new and what that even means in a place that is always in flux but again and again, preserves the old. Val tells me a story about the past association president who lost his nerve during one of these meetings and hauled off and punched one woman in the face, and how numerous residents spoke in the guy’s defense.

On my last day here, Val drives me to the airport, where I’ll buy several bags of overpriced Zapp’s potato chips to bring back to my roommates, who have promised to let me show them “my” Louisiana one day. The way that I feel when I’m here is like stepping slowly into a treasure chest, an old one that has collected forgotten knick knacks and oddities when the lock broke and the atmosphere swelled and leaked into it. It’s not in small part due to the fact that LSU is where I earned a full scholarship to graduate school, and so Louisiana, for me, always feels like a place I could make my own meaning, live life according to my heart’s vision, and not worry so much about the Should’s. Or what looks crazy. Or weird. Or different.

“Everyone here knows that it’s outsiders’ money and ideas that have played a part in the rebuilding,” Val says, as we pass yet another new charter school that’s hiring, featuring a billboard photo of beaming, uniformed children. “So that has made people open up to newcomers.” As an outsider, I can feel this to be true, despite the fact that I always have to play the jagged-edged, high-stakes “where are you really from?” game with guys in bars here. Truth be told, that game isn’t so different in bars I’ve visited in Tupelo, Mississippi or Marquette, Nebraska. It’s just that here even ownership is in flux. Everyone east of the Mississippi seems to want to know where to put a person on a map, but circumstances won’t allow for it in a city that evacuates and welcomes us in cycles.

The Katrina money is drying up for the social interest non-profits, but then there’s BP money and a new infusion of tech and education start-ups. The percentage of college educated adults has jumped, well, slowly risen, 3 points in the past ten years. The sense that old money rules this place is hard to ignore, but that too was rattled when the city lost 10% of its population after Katrina. See? You pin a stereotype on the place and it squirms out from under your thumb. Hard not to be charmed.

“This is a place for new ideas,” Val says, flicking her bangs out of her eyes with determination and fiddling with the air conditioner in the dashboard of her Prius.

And if one of my smartest friends believes this, then I know it must be true.

Dispatch from Denver/Western edge of the High Plains