The butcher interview is in the works! The butcher and I are conspiring to get it into shape for blog publication.

Meanwhile, I’ve been working at the writing lab as ye olde writing tutor.

And, I’ve been thinking a lot about writing anxiety lately. Not because I’m in the middle of it, actually (Huzzah!) but because for the first time ever, I am implementing small goals on the road to finishing my next round of novel revisions, instead of forcing myself to sit in front of the lumpy pile of printouts and stare at it until I either 1) see my life of an unrealized novelists flash before my eyes–woe is me or 2) alternate coffee and whiskey shots until the novel doesn’t seem that important anymore –good but my abilities are so impaired I have to go take a nap or watch more of Lost Boy’s DVD set of Hanibal. -bad.

Nope, I’m actually utilizing wisdom from the likes of this article from Write to Done.com.

I’m thinking about writing anxiety a lot because now that I’m treating my novel as a job–really, a small, less than 20 hours a week part-time job–it’s something I figure out when to work in, and when I’m done with the amount of time alloted to it, I am psyched to move on to other things. And strangely, usually, I actually look forward to working on it. As I’ve mentioned, I’m getting pretty good at detecting the Finished Product Gremlin, and building the self-discipline muscles to end a writing or revision session when the FPG starts getting too loud to hear my own thoughts in my head.

I think about anxiety in writing because I am now clear-headed enough to see how much anxiety and its attendant gremlins have stood in my path on the way to reaching my goals. And now, as writing tutor, I can’t help but see it in certain students, who, like me, are riddled with self doubt, and in those moments of the most intense panic, they turn to a structure or a pre-ordained script to try to squeeze their ideas into.

Scene: the Writing Lab at a Local Community College

Stage center: Me, and a student who I’ll call Butterfly, because her energy is graceful and inquisitive and overall adds cheer to any scene. Our heads are bent over her draft for her theater class, in which she’s been assigned to review a play produced at the college.

“When you write ‘She drank to try and fail to become a Nun,’ do you mean she is drinking alcohol in order to become a Nun? I know you don’t mean she’s drinking booze to be a Nun,” I say to B.

“No, no!” She flips her long braids behind one shoulder and sighs impatiently. The assignment is due in two hours, which I think is only part of her stress. “She TRIED to become a Nun a long time ago, and she failed at it. She acts like that doesn’t make her sad, but it’s clear that she drinks too much because she’s deeply upset that she failed at being a Nun.”

“Sooo, it’s obvious to you that what you’ve written isn’t as clear or as focused as what you just said to me right?” I give her a half smile, because it’s her third session with me this fall, and because I think we’ve come far enough for me to tease her a little. “As in, what you wrote means sort of the opposite, in a really confusing way, right?”

She raises her eyes to me. Purses her mouth. Sighs. Nods. “I knooooow.”

“You’re making mistakes in subject verb agreement that I haven’t seen you make in two assignments,” I say, testing our connection a little. “That makes me think you are in a hurry and you’re trying to get this thing in shape with barely enough time.”

She scowls at me and narrows her eyes. “Is that what you think?” She asks. She is squirming and tapping her fingers like a little kid who wants to be let out to play. The thing is, no one forces her to come to the Writing Lab. She came because she wants to get her writing in shape to qualify for creative writing, if not next semester, then the next.

I find out in the next few moments that her errors aren’t due to putting the assignment off to the last minute–which would be the reason in 99.9% of the cases I see at the writing lab. She is quite proud of the deep thinking she did on the review.

She writes about how one character’s heavy drinking is a representation of her regret and sadness, though there’s no dialogue to point to that. In her third sentence, one of the only complete ones in the page of type written thoughts, she writes that the blue back wall, being overtaken by peeling gray paint, reflects the impatience and desire for change at work inside each of the characters who appear in the play. And this is what she toiled days over. To arrange this insight–that the appearance of the set behind the characters illuminates their inner struggles. And I realize, after I remember to point out how interesting and sophisticated that sentence is, that she was waiting for some acknowledgment of that sentence the whole session.

We start to talk about the other reasons someone might suddenly start to make basic errors in their writing, after they’ve mastered those fundamentals of complete sentences. And we get to this:

“When I don’t care about a piece of writing, I fire it out, and it’s clear, and everyone loves it,” she says. “When I do care, when one thought opens up to another one, I have so much struggle to get my ideas across, that suddenly I can’t even write in complete sentences, and I’m making mistakes I haven’t made in forever.”

She looks like she’s going to cry, and she also looks tempted to treat me like I’m a gatekeeper to writing, or maybe some sort of punitive guru who can assign her twenty lashes and presto, the things she actually cares about won’t be so agonizing to make clear to others on the page.

We sit there for a minute, and I resist catching some of the anguish she’s swirling in. I also resist what I used to do, which is to not only catch some of the anguish, but to get invested emotionally–this is what made me a decent teacher, but a short-lived one, pre-burnout.

“Is it always going to be so hard?” She is seriously asking me. 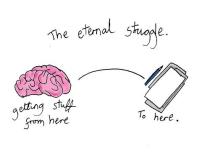 How wise is this observation, and how universal is the feeling of a challenge being insurmountable especially when you deeply care about it. Two months ago, my friend CaliGirl told me it was time to let go of the novel–in so many words–because I had made it so much a part of my life, that it was an extension of my body.

And that was becoming too emotionally heavy.

I tried to encourage B. and I told her all of us who work at the Writing Lab understand exactly what she’s going through–it’s why we teach writing because we’ve all struggled in some way which has taught us things we use to teach–but I don’t know if she heard. And honestly, I don’t know if everyone who teaches writing has struggled in some way. I know there are people who always did well at communicating themselves on the page, and so they are teachers because they are comfortable in the “sage” position of power that their talents afford them in a classroom.

B. was sad that her assignment had some of the deepest thoughts she’s written, and yet I pointed out that she was making errors she hadn’t made in a while and that maybe it was because she was putting a lot of pressure on herself.

I told her it would get better.

I have decided to believe it.

One thought on ““She drank to try and fail to become a Nun.”–Dispatches from the Writing Lab”

Interview with Bluescreek Farm Meats (1 of 2): The Schwarzenegger of Cattle