One of my first interactions was a simple request and response. I’d been eight hours on a bus from Minneapolis, sitting in the front seat, watching the snow fall and a total of five cars spin off the highway. By Chicago I was eager to move my legs.  I headed down Jackson Street toward Lake Michigan. Almost to the Chicago Institute of Art, I saw glittering through the flurries, a metal structure like feathered hair framing a dark face. I needed to know what it was. Despite my insensible footwear and light coat, I forged on in search of exercise and to satisfy my curiosity. I discovered the structure was at the base of a long bridge over a sculpture garden adjacent to the art museum. The bridge originated inside the 3rd floor of the art museum, so in I went. Through fogged glasses I sensed rather than saw all the eyes on me, snow-covered and hunched under my camping backpack. I was in no hurry to leave the warmth of the museum lobby after my trek but I had to state my purpose before they kicked my vagabond ass back out on the sidewalk.

“Through those doors to the left,” said a Big Mama Guard, with a sweep of her maroon sweater-ed arm, as if beckoning me onto a red carpet. And, indeed, I took regal steps out onto that bridge, into the garden, down to the plaza where the metal structure revealed itself to be an amphitheater. Let the curtains on my trip, open! 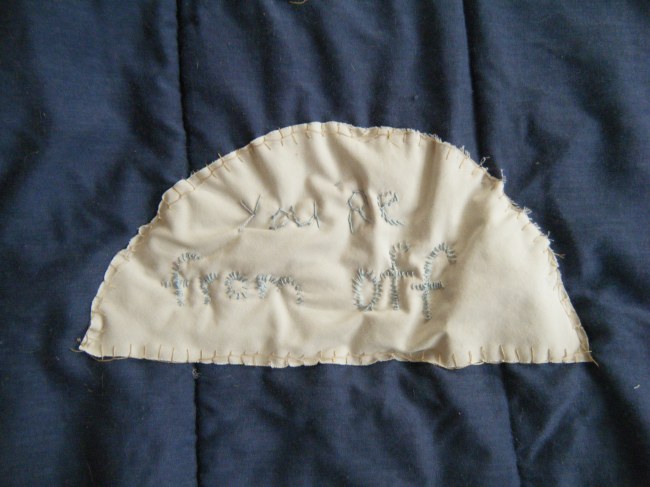 I zig-zagged through the corridor. Who knew the flat Mississippi Delta could cause such a bumpy ride? I was one of the last diners and could have had a table by myself, but, alas, I had the pleasure of getting to know Zack over lunch.

And thus we were off on topics ranging from how to make a perfect steak (all it takes is cajun seasoning – only the brand with the fat guy chef on the label – and 11 minutes on each side in a toaster oven at 475) to ceramics (a crush of his quit school to join a pottery community in Arkansas) to folk music ( I should check out the annual folk festival in his town) to the relative merits of Walmart (yes, even he, a bleeding heart liberal shops there because what other choice has he in North Arkansas?) to photography (his reason for going to New Orleans, although if there’s no fog, the photos are all cliché, so mainly he eats) to books (I was to get a Kindle ASAP. No more lugging around books while traveling. Must be a silly “from off” notion) to the finale: the layout of the French Quarter (Jackson Square was like a paper napkin with about 6 blocks – chop, chop, chop, chop, chop, chop went the chubby mustard stained side of his palm on the table – on either side. Past that isn’t for ladies like me). We closed down the dining car.

Mari Carlson has known Alison Barker since they were in 4th grade together in suburban Maryland. She now resides in Minneapolis with a railroad-conducting husband, a cake-making 10 yr old son and 2 cats. When not enjoying the company of these characters, she performs in classical and folk ensembles as well as teaches violin, volunteers at libraries, reads, makes art, cooks and walks around the city.