The Quit that Wasn’t

Most tours of duty on a freight train lumber lugubriously and are marked by long delays and scrupulous attention to redundant safety rules. The era of cowboy railroading has passed and Rail’s cache and the infatuated devotion rail-fans exude seem absurd to trainmen. Dragging mind-numbing quantities of stuff and prodigious piles of industrial commodities around sinks a railroader’s heart into his particular brand of capitalistic cynicism: only his career’s undesirable lifestyle justifies his wage and only his wage justifies his lifestyle.

A “Quit,” however, will infuse an engineer’s grey, dull eyes with sheen and lend spring to a conductor’s step. A “Quit” is an auspicious trip whose circumstances allow a crew to make their assigned terminal in less than eight hours; since we’re paid by mileage rather than hours, less than a day’s work, still yields a full day’s pay.

Some weeks back, a young hogger and I crested the rise at a river valley’s edge exuberantly because our 9,000 ton had come together with unexpected efficiency, ran smoothly despite the failure of our electric motor braking and met no delays at an infamous downtown chokepoint. “We’ll get a Quit!” we yelped and felt like cowboys until a skunk’s skull shattered that shift’s smooth prospects.

“PHEEW!” our air brakes shot into emergency, a stop so unexpected and perfectly engineered that the engineer had to tell me that it had happened. I trapesed back dozens of cars to find a cause, arrived at a gap in the train where the air hoses had separated and found a hunk of iron coupler on the ground–the latching knuckle above it showing a gash where the hunk used to be—then flinched at the stench of a skunk’s severed neck lying on the rail’s top edge, skull no more. We must have hit it at a crossing’s rise where two cars’ air hoses bounced off the carcass and broke free of each other. Our “Quit” was skunked! 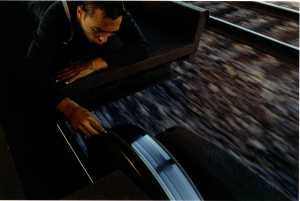 All images from the series A Period Of Juvenile Prosperity 2006-2009 © Mike Brodie, Courtesy of the artist, M+B Gallery / Yossi Milo Gallery

Days later, I did get a Quit, built a train and got home in time to put my son to bed. But, this Quit also “wasn’t” because rather than retire, I spent the whole night finishing Poe Ballantine’s Love and Terror on the Howling Plains of Nowhere whose “Elfin (The End)” exacted streams of tears from my face and a hastily scrawled detective theory from my pen. Weeks later, my surmises about who may have killed Steven Haataja sound insipid. What matters is the impression left on my heart by Poe Ballantine’s “Quit that wasn’t:” Having himself teetered on suicide’s brink (the ultimate Quit) Mr. Ballantine bravely rejects official dismissals of the Haataja tragedy as a suicide, refusing to quit on his immolated friend, Steven; his often strained marriage; and (perhaps) autistic son. Poe Ballantine’s prose reveals a heart that seems to inhabit his person like lightening a cloud–pulsing, flashing, zagging toward an inexorable, but unexpectedly exact earthward ground. With his book in hand, I am not merely a reader, but a conductor.