For some reason Thanksgiving in New Orleans tends to center around the Fairgrounds Racetrack. All morning, folks dressed in costume, moth-eaten jackets and crushed big hats, suspenders, and wacky headpieces wander through my neighborhood, from backyard brunch to buffets, clutching large mimosas or Bloody Marys. They filter through the neighborhood in singles, pairs, and groups, bouncing from one house to another, enjoying feasts provided by neighbors, coworkers, friends, and acquaintances. In between platefuls, everyone catches a race or two. It starts around ten in the morning, and ends right around sunset with the last race run. At the conclusion of the day, everyone’s typically drunk and in a great mood. No awkward conversations with distant relatives, no stress about bringing new lovers home for the first time, no racist remarks from an aging great aunt. Just the good stuff; excellent company, costumes, cocktails, and a little casual gambling.

There are several theories about why New Orleans natives and transplants alike opt to booze it up and indulge in a few wagers on what most of the country views as a holiday dutifully spent with family, prayers of thanks, and a sit-down feast using the good china. The tenuous early relationship between American government and subsequent settlers following the Louisiana Purchase, for example. The Americans brought Thanksgiving to New Orleans, which the existing French and Creole residents didn’t want any part of since they were still steaming mad over what many contemporaries thought of as a shady land-grab by America. What better way to snub the new Puritans in power then to ignore that most fundamentally American holiday?

Racing in the 1800’s. Folks today tend to try to dress up like what the original track-goers would look like with varying degrees of success.

Fairgrounds is the third-oldest racetrack still operating, and Thanksgiving is seen as opening day of the racing season. The track is open to the public and free all day, offers a buffet with turkey and all the trimmings, and becomes the stage in which friends meet, show off their garb, and bet on the ponies. The management does a good job making the day an event, and uses it to attract potential new gambling customers for the rest of the meet. It tends to function as a huge open house, reminding the neighborhood that it is more than just a venue for Jazz Fest. 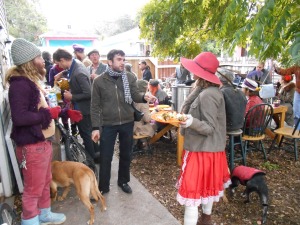 Culinary delights are usually provided in part by the hosting household, and in part potluck style. Almost everyone did a turkey, but the method of cooking was varied from brining, to deep-frying, to crab-boiling then baking. I personally liked the one cooked halfway in crab boil the best. Other local specialties included raw oysters shucked to order, hog head cheese, liver pate, andouille stuffed mirlitons, Cajun dilly beans for the Bloody Marys, seafood dressing, pecan pie, dark roux gravy over biscuits, ramen pie (yes, ramen noodle pie), the booziest Bourbon eggnog ever, and dirty rice. The more traditional trimmings were also in attendance, in the form of varied pies, sweet and regular potato dishes, and bottle after bottle of decent wine. Several trips to the corner store were observed for re-stocks of champagne or orange juice. All canines in attendance (some with their own bow-ties), made out like thieves and stuffed themselves every time someone accidentally or drunkenly set a plate down. All in all, all indulged.

Beneath The Womb: A forum on early New Orleans health care @ The Pharmacy Museum