Steve Spehar has completed his residency at the Studiola, and I’m so honored that he chose to exercise his steely discipline and multi-media talents on this blog for his one-a-day shoot-and-write 31 day challenge. December 2014 was filled with high quality content and a heart full of effort and reflection, and if you are just browsing by, I encourage you to check out some of Steve’s posts. He is not just a writer, he’s also a photographer. He’s not just a playwrite, he’s also a bartender. He didn’t just take pictures, he gave himself a daily assignment. And on those travels around New Orleans, he didn’t limit himself to his preconceived ideas of theme and focus. He met people, and interviewed them for the blog. He didn’t just interview people. He chose thoughtfully, and he listened. He didn’t just shoot pictures and interview people; he explored himself as an artist and this city he calls home. Even the days he was tired and told me he was really stretching for content, the dude researched references connected to his thoughts and captured a day in the life of an inquisitive artist who has a deep interest in process.

Steve taught me a lot about what good can come of not knowing, and acting out of curiosity about the uncertain, instead of fear of it.*

Sunday night, he leaned over a few glasses of wine and asked me, “who’s your curator for January?”

Normally, I’d have a list, an excessively thorough pitch to people, a schedule, and copious post-its laying about, spitballing avenues and ideas. And I would definitely have made up an answer–because that’s how I usually roll. Fix. Solve. Plug up holes.

But shit, life is loud, and I’ve been too busy to think about this stuff. I’m starting to wonder if maybe when you don’t know what to do, maybe you shouldn’t do anything.

I have the back of my old dollhouse, salvaged from an unpleasant afternoon with my late father. I recently took it out from behind a couch, and these days I stare at it a lot. I used to think it was a talisman, and if I could just come up with the right art project, I could channel it for great wisdom and healing of my past. Sometimes I think I will rebuild the thing, other times I think I’ll glue a lot of random crap on it. “Should I burn it?” I ask in my more dramatic, pyro moments. (The cleansing power of fire? Been there, done that.) Right now, I like just looking at it, and thinking about how much potential there is in the outline of a house, before all the decorating decisions have been made. I love this moment, the moment before the beginning sets so many things in motion, or, on my glass-half-empty-days, in stone.

People say that writers have only two or three ideas and they spend their entire careers revolving around those ideas, worrying them like pieces of clay, shaping them this way and that to convey and discover truths that palpitate just under the surface of the obvious. Maybe this is mine–wishing we could stay in that moment before the beginning just a little longer. 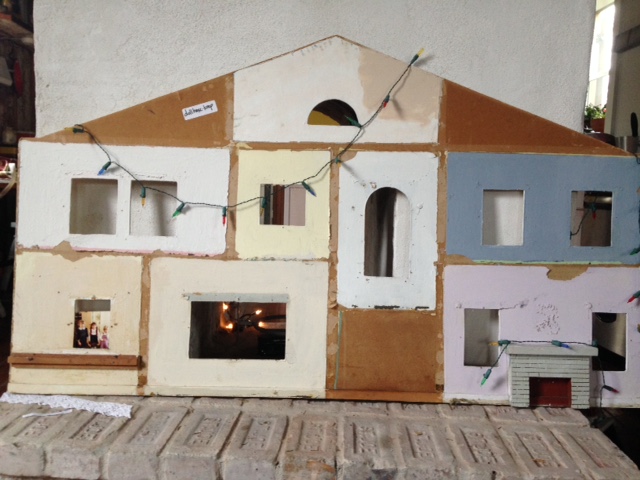 Let 2015 be a year of revolution/ let some new ways of thinking in, a bit loosed from the rusted clamps that have become too tight fitting for the expanding potential of our brains.

Those are great ideas, right? Easy to write and say, but I have no idea how to do any of that. I have litrally (as Chris Traeger would say) no idea how to answer the call to action that Steve makes in his final post.

Steve didn’t give us answers or a rulebook. I know, I know. That’s the point. Well, frankly, that’s terrifying.

How to begin the new year with no curator, no answers, no rulebook. Maybe we start with questions instead of answers.

Have you been using the outlines of your past as blueprints for your future without even realizing it? Do you fend off fear by scrambling for answers?

Has that been working out?

*If you stopped by the blog to read Steve; thanks, and I hope to continue to deliver content as interesting and wide-reaching as his was.

Fake it 'til you Make it