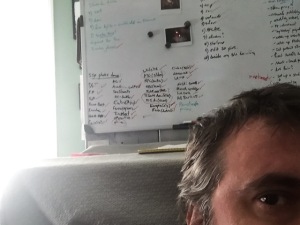 Steve lives in the complicated wonderland that is downtown New Orleans, and at various disparate moments has been known to call himself a photographer, actor, writer, director and musician. Sometimes other people have acknowledged and even participated in that social construct, and Steve finds that gratifying. Steve enjoys the concept of referring to himself in the third person. It seems to allow a certain ease of conceit, though it is comical and strange.

He studied creative writing and acting at San Francisco State University, co­founded a theatre company called Revolving Door Productions in southern California, and has had plays produced in Los Angeles, San Francisco, New York and Austin. He has imitated other people on stages in those places and others, like the Fringe Festival in Edinburgh, the Kafka Theatre in Prague, and various city parks and town squares all up and down the northeastern American seaboard, braying Shakespeare, loudly, in exquisite period costumes. He studied photography at the International Center of Photography in New York and has exhibited both in that city and here in New Orleans.

He was recently published in Black and White magazine. He revels the most in shooting street, travel and documentary style. He shoots both digital and film, and has around a bazillion cameras of all types and vintage. He has a darkroom in his home, which has always been his dream, and which he built himself, and spends not nearly enough time in. He no longer, however, has a walk-in closet.

Let’s have a conversation, can we? Every single day, for like, a month straight? And I’ll show you pictures and stuff, and you can look at them, and I might say stuff about the pictures or I might not, and we’ll just see how that goes?

One thought on “Steve Spehar”