“Married writer Jay Ponteri finds himself infatuated with a woman other than his wife and writes a manuscript to explore his feelings. Discovery of this manuscript understandably strains his marriage…” This is Wedlocked, Ponteri’s first book-length work. Jealous of marrieds, Alison Barker is intrigued to find out that not all is roses and orangesicles in the land of holy matrimony. She interviews Ponteri to find out even more. Ms. Barker, always a consummate professional, keeps complaints about her love life to a minimum. Push play! 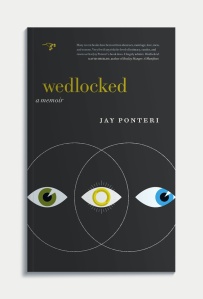 And then we continued on the page:

NS: How does the role of sex and sexual fantasy help the narrator stay true to himself or get more honest?

JP: I write a lot about sexual fantasy, about sex. The role sex plays in my life reveals my idiosyncratic (and commonplace) self. Like any other human, I’m filled with desire, with desire I can express in a sexual relationship, with even more desire that doesn’t get expressed, save for fantasy. And of course there’s the gap between sexual fantasy and the reality of our sexual lives, ie., bad sex reveals character, personality. we all have it, bad sex. How do we deal with that? Fantasy is, at its worse, a kind of medication, something that barely soothes momentarily, something that takes one away from the real possibility of sexual touch. Fantasy is, at its best, beautiful, ordinary, erotic, something that makes way for sexual touch. The narrator’s problem is that his fantasy life only agitates him, only takes him away from what is actual, makes him more lonely. As I worked, I told myself to write without censoring myself. We have to restrain ourselves in our ordinary lives enough as it is, so in my art or in this particular piece of art, I felt without exactly knowing why that I could NOT censor myself, that I needed to speak the unspoken or try to speak INTO or AT the unspoken. Men (and women) have A LOT of desire. The amazing comedian Louis CK has so much to say about this. Otherwise our culture doesn’t talk about this much. Pornography, prostitution, sexual addiction, Las Vegas, bikini wax. How do other men (and women) cope with this abundance of desire and love? (Sometimes I wish I could be a fly on the wall of an ancient cave to see how our predecessors dealt with this.) Well, they fuck. And they fucking things up a lot. And then don’t talk much about it. When I was a young man, just married, I couldn’t understand where all of my desire was coming from. I’d look at other men and think, do you have a lot of fucking inside your head too? My guess now is yes. Yes, they did. Yes, they still do.

The Marylhurst classroom, from which Ponteri skyped with Nola Studiola

NS: Sort of out of nowhere, there’s a passage in Wedlocked about the 11th century warrior Bohemond:

Late in the 11th century Bohemond led an army of leather-clad crusaders into Constantinople . He’d rape and kill women and girls in front of their husbands and fathers . The young boys, he’d castrate – tying their genitalia around their father ’s faces like kerchiefs . Half a head taller than most men, he was built like a stone hauler, but what terrified people the most was his sickly urine-yellow hair and pasty skin . After Constantinople fell, Bohe- mond invented a game in which crusaders stood atop the town wall and lobbed dead Turks to the ground where his challengers stood with swords raised . Human skewers . Even the most bar- barous crusader could barely hold a single dead Turk . Bohemond would skewer three, sometimes four, lifting them to the sky, to his Creator, not as an offering but as evidence of a world turned upside down . Three hundred years later Saint Louis, shame- ridden, taunted by his mother’s oblique piety, endless disapproval bunching her bloated face in his thoughts, wore into battle underneath his armor a hair shirt made of sharp wire . I’m the youngest of three boys . Had I lived in the middle ages, dad would’ve either killed me or sent me to a monastery for study and silence . One can kill the same person over and over again.

How did that appear in your writing process of Wedlocked?

JP: I’m a messy messy writer on purpose. Not at the sentence level but at other levels, like arrangement, paragraphing. And sometimes I do try to essay about what seems like disparate points in my work, e.g., my wife’s paintings and my hurting her, while other times, I let this disparate points form beautiful gaps, like the medieval history sections / motifs, e.g., St. Louis, Bohemond, the game of shinnies, the image of the youngest boy being killed off or sent to monastery. Those sections are about male shame, about the male self diminishing the male self, about seeing himself in the shadow of the older men in his family. It’s a terrible thing to beat up on oneself. It seems like very contemporary violence to me, if that makes any sense. The female version of this is Chelsey Minnis’s Poemland (Wave Books). But yes, this book is about being a failed son as much as it is about being a failed husband. I am and am not my father, and my son is and is not me.”

NS: Did you purposefully seek out Hawthorne books because of other writers there you feel kinship with?

JP: My favorite Hawthorne Books writer is Scott Nadelson. I love his patient, weird, long short fiction (Saving Stanley, The Cantor’s Daughter, and Aftermath), and yes, his new book of nonfiction, The Next Scott Nadelsonshares a heart with mine in that it’s self-conscious, digressive, self-referential nonfiction. It’s much more than story. It is not “minimal” prose. I actually had not planned to submit Wedlocked to Hawthorne because they had rejected my first book of stories many years before, and I just thought if they didn’t like that book, why would they like this one, but that was a dumb thought for me to have because I know that reading other people’s work is mysterious and you can never predict who will like and not like your work. My friend Scott Nadelson had read my manuscript and told me to try Hawthorne, that he believed Rhonda would want this book and he was right. I’m so lucky because Rhonda, Liz, and Adam Or and Adam McIsaac at Hawthorne are amazing people to work with. They know how to make beautiful books, and they know how to sell them. My sense is what makes Hawthorne so unique is how different their books are, how much variety they offer readers. That’s good news for a lot of young or unpublished writers.